74,000 hectares to be cultivated with cotton for the current season Damascus, SANA- The bodies concerned in the ministries of Agriculture and Water Resources seek to increase areas under cultivation with cotton, which is one of the strategic crops in Syria, by providing production requirements of  fertilizers and pesticides as well as rehabilitating public irrigation networks that have been sabotaged. 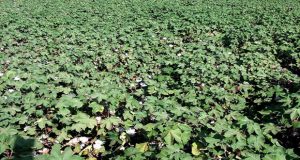 Speaking to SANA, head of Plant Production at the Ministry of Agriculture and Agrarian Reform, Abdul Moein Qudamani, said that the Ministry seeks to increase the cultivated areas with cotton this season after their decrease during the past years as a result of high production costs, sabotage of irrigation channels and the shift towards alternative crops.

Qudamani indicated that the agriculture plan included the cotton-producing provinces according to the ability of the government irrigation networks as the crop needs large quantities of water, pointing out that the planned area to be cultivated with cotton this year witnessed a limited increase compared to the last year as it reached 73858 hectares, an increase by nearly 200 hectares.

He clarified that the cultivation process began in all regions, with a noticeable increase from the previous season, as the cultivated area reached until the sixth of the current month / 13048 / hectares out of the planned area to be grown in cotton.

Deir Ezzor province, according to Qudamani , came first in implementing the agriculture plan for growing cotton , in which the cultivated areas reached 6850 hectares out of 14300 hectares set to be grown , followed by Raqqa with 3000 hectares , while in Hasaka it reached  2713 hectares, Aleppo 272 hectares and al-Ghab is 112 hectares.

2020-05-06
m.eyon
Share
Previous Commemorative stamp on the occasion of Martyrs’ Day
Next Spring in Sweida Province