Heroes of Evacuation Day, honorable icons in Syria’s history of struggle and resistance Damascus, SANA_ On April 17th, 1946, Syrian people crowned an eventful march of struggle during which they offered great sacrifices to force the French occupiers out of Syrian territories.

Since then, Syrian people have been celebrating this day with great pride remembering the great heroic deeds achieved by our grandfathers.

The memory of the French colonizer’s evacuation from the Syrian land bears deep-rooted meanings, filled with pride in the legacy of the Syrian people’s struggle, sacrifices and heroism in confronting the forces of colonialism and domination.

The celebration this year coincide with the great victories realized by the Syrian Arab army personnel who have liberated the majority of Syrian territories from terrorism. 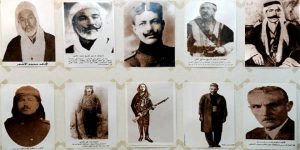 On this day, Syrians recall names and photos of their heroes of struggle against colonialism, such as Youssef Al-Azma, Ibrahim Hanano, Saleh Al-Ali, Sultan Pasha Al-Atrash, Ahmad Mraiwed, Hasan al-Kahrrat and many others who have become icons of honour for an era renowned for its struggle and resistance against the brutal colonizer.

Retired General Mahmoud al-Shaqa said that Independence Day is a great anniversary for all the Syrians, because it was the outcome of unremitting resistance waged by our fathers and forefathers led by national leaders.

He stressed that the great resistance of the Syrians yielded a great victory through which independence was achieved.

The national Independence lessons, according to al-Shaqa, are always present in the hearts and minds of all Syrians as they put the corner stone of national unity, advocated the greatness of sacrifices in defense of the homeland.

This was proved by the Syrian Arab army heroes who have been bravely confronting the terrorist war launched against Syria for over nine years.

Retired General Mohammad al-Shimali said that the National Independence Day is considered a luminous turning point in the history of Syrian people.

Syria will witness a victory soon and return better than it was as it will continue its civilizational path.