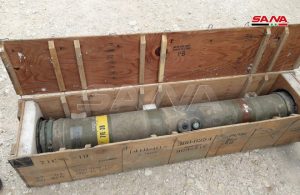 A field commander said that during the canvassing operation in Saraqeb city, army units uncovered laser-guided anti-armor TOW missiles in addition to their tripod mounts which were used by terrorists against the Syrian Arab Army.

On Aleppo-Damascus international highway, SANA’s camera documented the movements of the civilian cars on the road which the army had secured by dismantling mines and explosives from the its surroundings.

A field commander said to SANA’s reporter that after the army liberated Saraqeb city, engineering units have dismantled mines and explosives planted by the terrorists on the road.

A number of civilians who had been passing through on the road, heading from Aleppo to Damascus and vice versa, spoke to the reporter, expressing relief over the fact that the road has become safe thanks to the Syrian Arab Army’s sacrifices after the attempts by terrorist organizations to keep it blocked.