Damascus, SANA – The Indian Embassy in Damascus on Sunday evening organized a reception at Dama Rose Hotel on occasion of the 71st Republic Day. 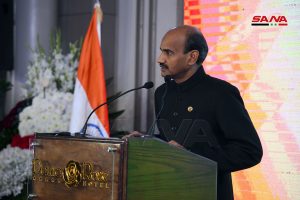 Rahman hoped that security and stability will prevail across the entirety of Syria, asserting the strength of the friendly relations between the two countries.

For his part, Deputy Foreign and Expatriates Minister Fayssal Mikdad said that the past few years witnessed more cooperation and joint action between the two countries, affirming that bilateral relations are strong than ever. 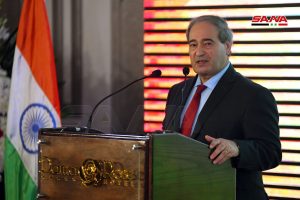 Mikdad lauded India’s position in support of Syria throughout the years of the war on terrorism, particularly in international circles, as well as its efforts in providing humanitarian aid, especially medical aid.

He noted that India’s commitment to maintaining diplomatic representation on the highest levels during the war on Syria shows the strength of the relations between the two countries, while states that claim to be civilized and humane withdrew their ambassadors and imposed coercive economic measures against Syria and its people.