Damascus, SANA – India’s Ambassador in Damascus Hifzur Rahman reiterated his country’s support for Syria in its war on terrorism, stressing the need to bolster bilateral cooperation, particularly during the reconstruction stage. 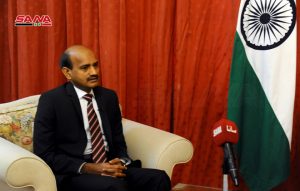 Speaking to SANA on occasion of India’s 71st Republic Day, Rahman said that India supports reaching a solution in Syria via a comprehensive political process led by the Syrian state on the basis of respecting Syria’s sovereignty, territorial integrity, and right to fight terrorism in all its forms.

Regarding India’s contribution in the reconstruction stage, the Ambassador said that Indian businessmen want to find opportunities for cooperation in investment projects, with plans to carry out projects in tourism, transport, technology, and other fields.

He added that the upcoming meeting of the Indian-Syrian Joint Work Committee will reactivate cooperation agreements to participate in reconstruction. 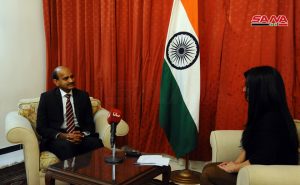 Rahman noted that India provided between 70 and 100 training scholarships to workers in various ministries in Syria, in addition to scholarships for students which have benefited over 1000 students since 2018, as well as providing a special training course for diplomats that benefited 60 diplomats so far, with another group to be sent in February and March.

He noted that an MoU was signed to reactivate the Syrian-Indian Distinction Center for IT in Damascus, pointing out to the initiative carried out recently on the 150th anniversary of the birth of the Mahatma Gandhi, through which prosthetics were provided to over 500 injured people in Syria.

Rahman concluded by thanking Syria for its support for India in international circles, wishing it prosperity and peace.