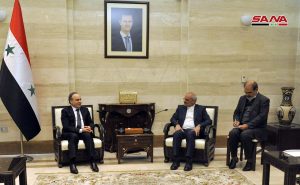 Khamis indicated that the Syrian state paid special attention to providing requirements of human development and confronting impacts of terrorist war which tried to distort moral and culture values of the Syrian youths.

“The Syrian government has worked to rehabilitate schools in areas which had been liberated from terrorism, upgrade the scientific research system, and secure requirements of vocational education” Khamis said.

He pointed out to the importance of bolstering cooperation with friendly countries in the fields of exchanging expertise and knowledge and organizing joint activities that would enhance the culture of counter-terrorism among the coming generations.

For his part, Minister Mirzaei lauded the resilience of educational institutions in Syria despite the terrorist attacks, reiterating his country’s support to Syria in the development plans and its desire to cooperate in developing Curricula and expanding prospects of scientific research.