Moscow, SANA- The Syrian-Russian Permanent Committee for Economic, Commercial, Scientific, and Technical Cooperation on Wednesday signed the final protocol of its 12th meeting and an agreement of cooperation in domain of customs’ facilitations between the two countries.

The agreement of customs facilitations was signed by al-Moallem and Deputy Chairman of Russian Customs’ Service Vladimir Ivin.

The Syrian-Russian Permanent Committee held two sessions, one of which was a mini-session between al-Moallem and Borisov, and the other was an expanded one. 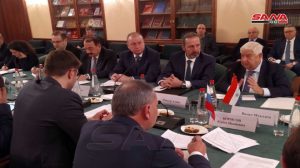 During the mini-session, al-Moallem said that the goal and the basic principle for cooperation between Syria and Russia is to build a strategic partnership which promotes up to the level of the current strategic relations, underlining the importance of upgrading this cooperation to the level of directives of Presidents Bashar al-Assad and Vladimir Putin, as well as to the aspirations of the two peoples.

Al-Moallem called for searching about means that guarantee the achievement of a qualitative step in economic relations and trade exchange, in addition to overcoming all obstacles.

He said that the Syrian people highly appreciate Russia’s stances regarding the unjust war which has been imposed on Syria, and welcome Russian contribution to the reconstruction process in the country.

For his part, Borisov described Syrian-Russian relations as deep , affirming his country’s readiness to continue its interaction in a constructive manner and of mutual benefits in all domains of political dialogue, military and economic cooperation, and human relations.

In the expanded session, al-Moallem affirmed that the Russian stance regarding the terrorist aggression, to which Syria is exposed, has formed a new depth in the historic relations between the two countries. 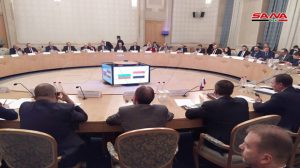 Al-Moallem hailed the Russian support to Syria in all levels, especially in the military domain and the contribution to countering terrorism, which was a major factor in the field achievements against the internationally terrorism groups and their supporters from the conspiring parties against Syria, including the United States and the Turkish regime.

He stressed that the Syrian people and its armed forces are more determined to continue the field achievements and hunt the remnants of Takfiri terrorism until eliminating it, and end any illegitimate foreign presence on the Syrian territory.

“Syria is dealing in a positive manner with all serious efforts to come out of the crisis, based on the respect for the Syrian national sovereignty and non-intervention in its domestic affairs,” al-Moallem concluded.