Deir Ezzor, SANA- Hundreds of Syrians who have been displaced due to Daesh (ISIS) terrorists’ acts on Wednesday returned to their villages and towns liberated by the Syrian Arab Army in Deir Ezzor eastern countryside. 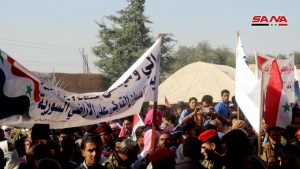 A number of the returnees thanked the Syrian Arab Army that returned security to their villages and towns, and dismantled landmines and IEDs planted by terrorists before retreating from the area , affirming readiness to cooperate with bodies concerned to rebuild what has been destroyed by the terrorists.

Locals of Baqras town and the neighboring villages held a public celebration marking the return of the citizens to their areas, chanting slogans glorifying the homeland and its army.

SANA’s reporter in Deir Ezzor said that the authorities concerned had settled legal status of a number of the citizens who returned to their areas as per the amnesty decree so that they can return to their normal lives.