President al-Assad: Main goal of war on Syria is undermining pan-Arabism and affiliation

Geneva, SANA- The Mini-Committee of the expanded body of the Committee of Discussing the Constitution on Thursday continued activities for the fourth successive day at the UN headquarters in Geneva with the participation of the Syrian Government-backed delegation and other delegations. 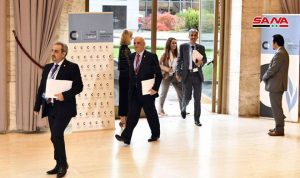 In a statement to SANA’s delegate after the end of the morning work session, a member of the Syrian Government-backed delegation, Mohammad Kheir al-Akkam said that today’s session focused on the issue of Arabism and the civilizational depth of its concept, and raising the issue of combating terrorism to the constitutional level, stressing that this measure is necessary due to terrorism to which all Syrians have been subjected.

Al-Akkam indicated that today’s session also focused on state’s neutrality towards religions, and respect for freedom of belief, adding that and that there are articles in the Syrian Constitution emphasize the rule of law and accountability.

Over the past days, the committee has held several sessions according to the agenda which was approved, and which was proposed by the Syrian Government-backed delegation, according to sources close to the UN.

Last Friday, the expanded body of the Committee of Discussing the Constitution agreed on the members of the Mini-Committee and it approved a paper on the Code of Conduct and the measures which govern the work of the expanded and small bodies.

Arabism rule of law The Mini-Committee of the expanded body of the Committee of Discussing the Constitution 2019-11-07
ruaa-jazaeri
Share
Previous Iran renews support to Syria’s sovereignty and territorial integrity
Next Authorities find huge amounts of weapons, ammunition in countryside of Damascus, Daraa and Hama