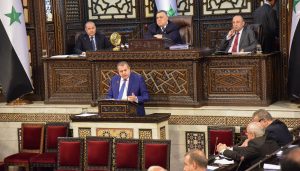 Interpositions of the MPs concentrated on controlling the markets, decreasing prices and boosting the role of the Syrian Establishment for Trade and opening new customer centers to be a real competitor in the market.

The MPs also called for improving the quality of bread and increasing the quantity of wheat for the bakeries in addition to increasing sponsorship on the oil stations.

Minister of Internal Trade, Atef Naddaf, briefed the MPs on a review about the work of his ministry, saying that the sale volume of the Syrian Establishment for Trade during the last three months increased up to reach 15 billion SYP.