Al-Moallem discussed with Russian Foreign Minister Sergey Lavrov means of bolstering strategic relations between the two friendly countries , and the importance of continuous coordination in all issues. 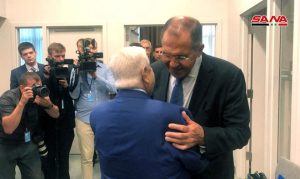 The two sides  discussed the developments of the situation in Syria, especially the committee on discussing the constitution, and  the importance of continuing the fight against terrorism until liberating all Syrian territories and withdrawal of foreign troops present in Syria illegally.

The two sides’ points of view were identical regarding the committee on discussing the constitution, which has been formed recently, as it constitutes a significant step in the political track, reiterating that the constitutional process is a completely Syrian internal affair which should be led and owned by Syria and  any foreign party will not be allowed to interfere  in its work  and outcomes.

The view points were also identical with regard to the fight against terrorism till eradicating it completely and restoring security and stability to all Syrian territories with respect for  Syria’s sovereignty, independence and territorial integrity.

In the same context, al-Moallem discussed with Foreign Minister of Cyprus Nikos Christodoulides the deeply-rooted historical ties binding Syria and Cyprus and means of enhancing them to serve the interests of the two friendly people .

For his part, the Cypriot Minister expressed his country’s full support to Syria’s sovereignty , independence and territorial integrity, asserting support to the efforts exerted for making the political track a success and reaching a political solution to the situation in Syria.

He also expressed his country’s hope that security and stability would be restored for all the Syrian lands.

Al-Moallem also discussed with Venezuelan Foreign Affairs Minister Jorge Arreaza means of enhancing bilateral relations and the importance of coordinating stances  between the two  countries on all levels in facing the economic terrorism and hegemony which the US attempts to impose on them.

The two sides views were identical on continued coordination between the two countries in the international circles to defend the joint interests of their friendly people and support the potentials of their steadfastness.

Al-Moallem reiterated Syria’s firm support to the Venezuelan people in facing the American attempts to spreading chaos  in the country .

For his part, the Venezuelan Minister  expressed appreciation over Syria’s stance in supporting his country, renewing Venezuela’s support to Syria in facing the terrorist war waged against it.

Al- Moallem also discussed with United Nations Under-Secretary-General and Executive Secretary of the Economic and Social Commission for Western Asia (ESCWA) Rola Dashti  the relations of cooperation between Syria and the ESCWA.