Damascus, SANA – In al-Jazmatiya area in the Damascene neighborhood of al-Midan, the visitor finds themselves in front of a human development project called Beit al-Sharq (Orient House) for Heritage, one of projects of the Syrian Al-Wafa Association for Development, with this historical house serving as an incubator for craftsmen whose workshops had been destroyed during the years of the terrorist war on Syria. 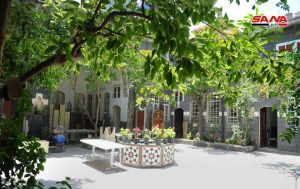 The house dates back to the end of the Mamluk era and was at risk of collapsing, but the Association renovated it in 2018, transforming it into a center for providing training in handicrafts and spreading awareness about national heritage, as well as allowing artisans to earn a decent living and developing the skills of newcomers to crafts by building a practical education system that serves sustainable development.

The crafts hosted in Beit al-Sharq are distributed among the rooms of the house, and these crafts include wood mosaics, shell inlaying, stone mosaics, marble work, all types of engraving, ِArabic khait and muqarnas, stained glass, Damascene paint, Arabic calligraphy, brocade, and handmade carpets.

Al-Wafa Association, a civil society, began focusing on development work since 2014 out of its belief in the need for creating a sustainable environment for targeted groups. Director of the Association Remal Saleh told SANA that Beit al-Sharq achieved its first objective by finding a place for craftsmen whose workshops in the countryside of Damascus were destroyed by terrorism. 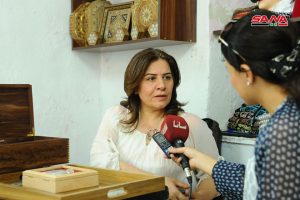 Now, the Association moved to achieve its second objective, which is teaching those who wish to practice these professions in order to preserve them from extinction, and to build partnerships with the relevant establishments and turn the project into an academy for teaching of the Syrian heritage, she said.

According to Saleh, the third objective focuses on the integration of craft and science by setting up a heritage library for specialists and researchers in the Syrian heritage, emphasizing that working in the field of development is motivated by the love for the homeland, the sense of belonging to it, and faith in its capabilities which must be nurtured.

Damascene mosaics tell the story of a profession that decorated the houses of Damascus, and according to the craftsman Zakaria Safi, this profession depends mainly on cutting wood into very thin pieces, inlaying it, and converting it into precise artistic and geometric patterns that use all kinds of wood such as walnut, eucalyptus, lemon, Damask rose, beech, apricot, olive. 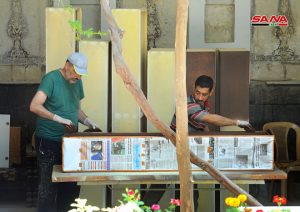 He emphasized that the goal of all craftsmen is to preserve the profession and teach it to young people who are able to practice it.

As for the ancient art of Syrian stone mosaics, it dates back to more than three thousand years, and is marked by the high level of technical skills used in making it, in addition to the richness of the subjects it portrays and its connections to architecture and decoration, which is displayed on the walls and floors in the many palaces and places of worship in Syria.

Craftswoman Wafaa Hassan, who has been making stone mosaics for 23 years, said this craft requires a great deal of accuracy and fine taste in implementation, as well as the use of special equipment and tools for cutting natural marble.

She showed readiness to teach the craft to those interested in it, because she believes in the necessity of protecting traditional crafts from extinction. 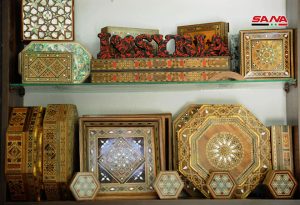 Wood engraving, carving, and inlaying with shells is one of the Syrian crafts that crossed the borders and became famous around the world, and according to craftsman Muhammad Saeed Kraimo, it requires patience, skill, and an artistic vision.

He talked about the stages of producing each piece and the different styles of patterns used in it such as Andalusian, Fatimid, and Arabian.

Kraimo said the current goal that he aspires to is teaching children of the martyrs the craft to “return the favor to those who protected Syria and its dignity.”

As for Arabic khait and muqarnas, it is an architectural craft developed by Syrian craftsman that involves multiple pieces of wooden “khait” or “thread” overlapping and positioned at sharp angles to forming intricate geometric shapes. 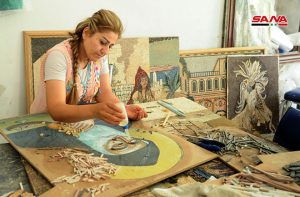 Craftsman Maher al-Shami talked about the different types of muqarnas and the wood used to make it, mainly poplar, and the method of making these decorations which are placed in the corners of Damascene homes. He also called on young people to learn this deep-rooted Syrian craft.

Drawing patterns and decorations on wood is the basis of the work in the “Damascene paint” craft, with the patterns including floral and geometric shapes, verses of poetry, proverbs, and Quranic verses.

Craftsman Maher Bouzou said that this the craft is exclusive to Damascus, and dates back to 1400 years. He explained that it involves embossed decoration on pieces of wood coated with embossed putty in different colors, which are used to decorate walls and ceilings of the halls. 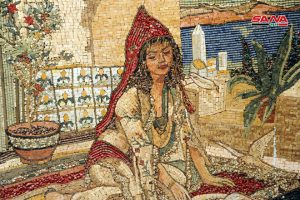 Bouzou said this craft uses dyes made of plants and minerals, going over the stages of work which involve design, woodwork, foundation, caulking, embossing, drawing patterns, gold leafing, and decoration.

He pointed out that thanks to Beit al-Sharq, he managed to return to work and carry out his mission of preserving the heritage by training new craftsmen, especially since the war to which Syria is exposed caused a decline in the number of craftsmen, and he believes it is necessary to teach crafts to the children of those who sacrificed their lives for the sake of the country.

In one of the beautiful corners of Beit al-Sharq, artist Samar Abbasi, a young woman with special needs, sits to create beautiful paintings. Abbasi, who has hearing and speech impairment, defied her conditions and channeled her sentiment, skills, and immense potential into her art, with Bouzou collaborating with her to combine her paintings with his craft.

Abbasi is currently working on a painting of the Umayyad Mosque using acrylic paint, focusing meticulously on the smallest details.