Damascus, SANA – Speaker of the People’s Assembly Hammoudeh Sabbagh said that Syrian-Belarusian relations are strong and deep-rooted, and that work is underway to develop them on the parliamentary levels. 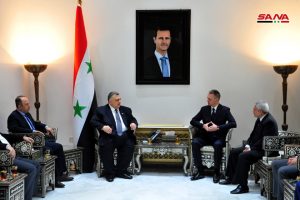 During his meeting on Tuesday Ambassador of Belarus in Damascus Yuri Sluka, Sabbagh lauded Belarus’ positions in support of the Syrian people in the face of the terrorist war.

He stressed the importance of strengthening relations between the two countries, particularly on the parliamentary level.

For his part, Sluka asserted his country’s support for Syria in the fight against terrorism, stressing the importance of joint parliamentary work.

Talking to journalists after the meeting, Sluka said that Belaurs has provided much aid to Syria and is always ready to continue providing it, adding that his country will participate in the 61st Damascus International Fair. 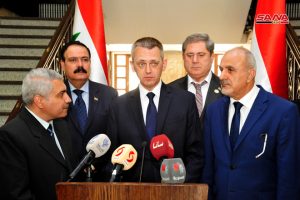 Tehran, SANA- Iran called for the importance of removing the coercive economic measures imposed on …