Efimov: Any illegal foreign military presence in Syria should be terminated Damascus, SANA- Russian Ambassador in Damascus Alexander Efimov said that Russia stands in face of all attempts of some countries ,which have lost the battlefield in Syria, to employ diplomatic and financial means in order to deny the Syrian peoples’ right in protecting their Sovereignty and territorial integrity.

In an interview with SANA marking the 29th anniversary of Russia’s National Day , Efimov said that Russia and Syria enjoy strategic friendly relations , which proved strong and steadfast in face of regional and global challenges over the past years. 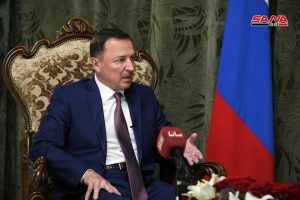 ” Russia never deserts friends, especially when they are in trouble . We lent a helping hand to the friendly Syrian people in the most critical moments of its fight to defend the state from foreign-sponsored terrorist threat ,” the Russian Ambassador said, adding that these efforts resulted in restoring Syria’s state authority to the most of its territories with safety turning back gradually to these territories.

Efimov said that Russia is making much effort to achieve a lasting settlement to crisis in Syria through launching a political solution led by the Syrians themselves with UN support and away from foreign intervention, considering that Syrian National Dialogue Congress which was held in Sochi last year represents a step forwards in this regard.

“Russia shares concerns of the Syrian state about the situation inside and around Idleb. We do know that terrorists from “Hayat Tahrir al-Sham” control 99% of the area,” he said, adding that the Syrian Arab Army , in cooperation with the Russian Aerospace Forces are conducting the operation to eradicate the terrorism hotbeds there, which turned out to be quiet effective, stressing that the strikes have been launched only against terrorists’ facilities identified as such by intelligent data.

The Russian Ambassador said that the current situation in Idleb is temporary and the final goal is the restoration of sovereignty of the Syrian state in these areas , affirming that “Russia will continue to fight against terrorists despite laments coming from some of our partners.”

Regarding the situation in in the Syrian al-Jazira region, Efimov stressed on the necessity of ending any illegal foreign military presence in the country, noting that Russia does its best to keep this case in focus of the Security Council.

He indicated that with restoring security and safety over Syria, more new opportunities for bilateral cooperation in various fields will occur between Russia and Syria to serve the interests of the two peoples in the two countries.