Aleppo, SANA – The 2nd edition of Aleppo International Fair kicked off on Saturday at the Sports City in al-Hamadaniya area in Aleppo, with the participation of 500 companies from Syria and abroad. 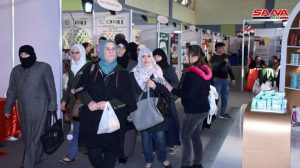 Ali Nizam, the Fair’s director, said the second edition marks an increase in the number of participants and the quality of local products, and that the goal of this fair is to prove that Syria will continue industrial production despite all difficulties.

SANA talked to some of the participants, including Mohammad Brimo, Director of Arabica Food Company, who stressed the need to support national industry and prove its presence, noting that this year’s edition is better organized than the first one. 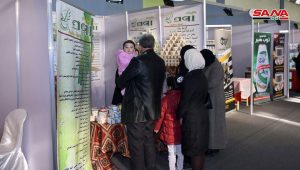 Meanwhile, Ahmad Tasabehji, Marketing Director of Delta for Food Industries, said one of the goals of participation in the fair is to communicate directly with consumers, while Abdelrahman al-Damakhli, Director of Al-Sharq Food Products Company said this Fair is an important economic event that proves that Aleppo city has recovered. 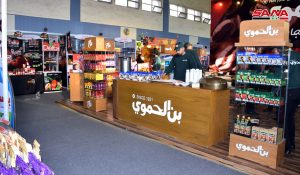 In turn, Omar Mawlawi, Marketing Supervisor of Al-Hamwi Coffee, said that the Fair proves that national economy is still active, while Humam Juju, Production Director at Juju Cosmetics, said this event allows consumers to find out about local products.

In a similar statement, Firas Qudaimati, owner of General Petrochemicals and Petroleum Products, said the Fair is an endeavor for supporting and encouraging national products, while Ahmad al-Safadi who works in the field of accounting and archiving software, said participation in the Fair has special significance as commercial activity returned to Aleppo and many of the companies and shops that resumed operations require accounting software.