Palmyra, SANA-A German tourist group visited on Monday the archeological city of Palmyra, a step that could return the European tourism to Syria after suspension for many years because of the terrorist acts in the country. 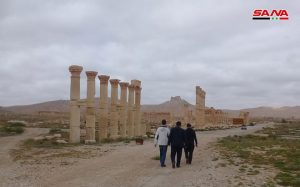 The group inspected the most prominent features of the cultural civilization of Palmyra and they documented, by photos, the destruction left by Daesh terrorists against the culture, history and human heritage of this archeological city.

The tourists were happy to see this “miracle city,” as they described it, at the same time they were regretful and sad over the sabotage that affected some historic edifices of the city.

2019-04-08
m.eyon
Share
Previous A new batch of displaced Syrians return from Lebanon
Next Mikdad discusses with Westhrin issue of landmines left behind by terrorists