Damascus, SANA-Consulate of Sri Lanka in Damascus held a reception on Monday on the 71st occasion of National Day. 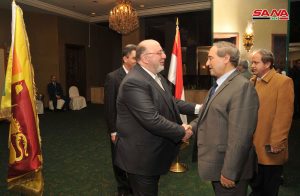 Consul of Sri Lanka in Damascus Mohammad Msalam al-Droubi hailed the distinguished relations connecting Syria and Sri Lanka in the cultural, social and economic domains, saying that both countries had a history of struggle in the face of destabilization attempts and foreign intervention.

He hoped the two countries would have more cooperation, particularly during the reconstruction stage.

Deputy Foreign and Expatriates Minister, Fayssal Mikdad, for his part, described relations between the two states as strong which are based on mutual respect and cooperation.

He added that in spite of pressures which have been exerted on Sri Lanka, it has stood by Syria against terrorism.