Damascus, SANA – The Syrian-Iranian Business Forum kicked off on Tuesday at Dama Rose Hotel in Damascus, in the presence of Prime Minister Imad Khamis and Iran’s First Vice President Eshaq Jahangiri, who is heading a delegation currently visiting Syria. 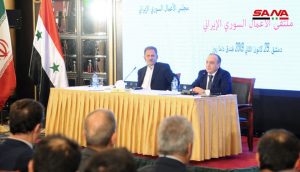 Premier Khamis said that Syrian-Iranian economic relations are witnessing remarkable developments, calling on Iranian economic activities to participate in the reconstruction of Syria. 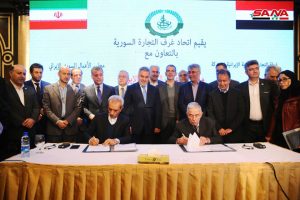 In turn, Jahangiri said the visit of the Iranian delegation and its results affirm that the reconstruction stage has begun, calling on Iranian companies to participate actively in it.

For his part, Chairman of the Federation of Chambers of Commerce Ghassan al-Qala’a said that businessmen are intent to boost trade exchange between the two countries and establish cooperation projects in all economic fields. 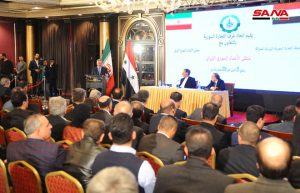 Discussions during the Forum focused on increasing trade exchange, preparing conditions for ensuring the success of joint projects, addressing obstacles affecting the work of businessmen, and providing facilitations to investors.

On Monday, Syria and Iran signed 11 agreements, memos of understanding and executive programs to enhance cooperation between them in the economic, cultural, scientific, infrastructure, service, investment, and housing fields.

The agreements were inked at the end of meetings of the 14th session of the Syrian-Iranian Higher Committee.