Patriarch Yazigi: Difficult days have passed with crisis behind us, we can only see the unified Syria Damascus, SANA- Greek Orthodox Patriarch of Antioch and All the East John X Yazigi stressed in a mass held Sunday at the Church of St. Ignatius of Antioch that “the difficult days have passed and the crisis has become behind us and we can only see the unified Syria.” 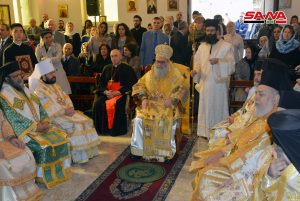 His Beatitude’s remarks came during the mass he headed marking the 60th anniversary of the Damascus representation of the Russian Orthodox Church.

Patriarch Yazigi conveyed the Syrian people’s greetings to the Russian leadership and people for their support to Syria.

In turn, Metropolitan Hilarion affirmed support of his country and the Russian Orthodox Church to the Syrian people, hoping that the Church would provide the necessary medical support for the wounded in Syria.

Church of St. Ignatius of Antioch Greek Orthodox Patriarch of Antioch and All the East John X Yazigi mass Metropolitan Hilarion Patriarch of Moscow and All Russia Kirill 2018-11-18
admin
Share
Previous US and Israeli-made missiles from terrorists’ remnants found in Daraa countryside
Next Syria comes third in Open Junior competition at 2018 Robot finals