Homs, SANA-Under the patronage of President Bashar al-Assad, the commander-in-Chief of the army and armed forces, a new batch of the Military Academy students was graduated Thursday. 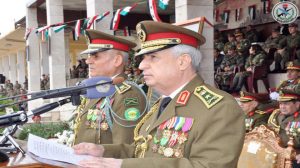 Minister of Defense, Ali Abdullah Ayoub, who represented President al-Assad in the ceremony, affirmed that the achievements realized by the Syrian army soldiers in the war imposed on Syria were clear evidence that Tishreen heroes and their sons are formulating today Syria’s epic with its title “victory over terrorism.” Beijing, SANA- The US stationing of troops in Syria and its smuggling of oil and …