Damascus Countryside, SANA- Many projects have been carried out in al-Zabadani city in Damascus Countryside recently, including paving the streets and its entrances, installing new electric networks and transformers , and repairing water, sewage, and telephone networks. 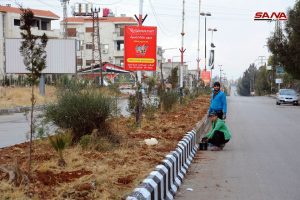 Speaking to SANA, Head of al-Zabadani Municipality Bassel Dalati said that the population in the city has increased during the past period, as the number of the families which returned to al-Zabadani reached 4,500 families, while the number of the ready residential flats reached 600 flats which were distributed to the owners.

Work is underway to rehabilitate a total of 200 new flats, which is being carried out by international organizations in cooperation with Local Administration and Environment Ministry and Damascus Countryside Governorate.

Dalati clarified that maintenance and rehabilitation of all the drinking water wells, reservoirs, and networks has been completed, and a total of 35 electric substations were installed. 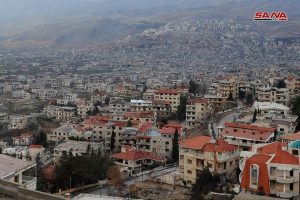 He said that paving the city streets has begun two months ago, adding that 50 percent has been completed of the contract which is being carried out between the General Company for Roads and Bridges at a cost of SYP 50 million.

Six schools have also been rehabilitated, Dalati said, adding that a study has been made for repairing the remaining schools, some of which need to be demolished and rebuilt while others will require a large budget to repair due to the heavy damage they sustained.

He added that work is underway to rehabilitate the farmlands in al-Zabadani plain and provide irrigation water through the installation of a collective network of irrigation.