Damascus, SANA – US Senator Richard Black doubted that the US political approach has achieved any benefits for the American people, while this approach has resulted in destroying the Middle East, adding that the terrorism that struck the US on 9/11 and the terrorism targeting Syria today are one and the same.

In a statement to journalists following a meeting with Presidential Political and Media Advisor Bouthaina Shaaban on Sunday, Black said that Syria has the right to reclaim all its territory without exception and to live in peace after years of war. 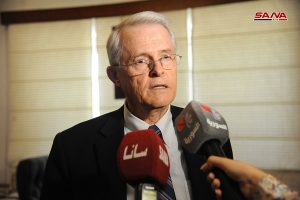 He said that the US should work with Syria to liberate the people of Idleb who are being used by terrorists as human shields, stressing that the West must understand that the “militants” in Idleb are all affiliated to Jabhat al-Nusra which is part of Al Qaeda.

The Senator said that there is a movement in the US administration that works towards prolonging the war in Syria, warning against the threats posed by the reported plans of the British intelligence to stage a chemical attack in Idleb and blame Syria for it in order to justify attacking it.

Black called on Western state to put an end to the economic sanctions imposed on Syria, holding the consecutive US administrations responsible for the chaos in the Middle East and the destruction in Libya, Iraq, Afghanistan, and Yemen.

He hoped that US foreign policy would shift from harming the Middle East to helping it, and that it would use more diplomacy and less military force.

The Senator said he feels safe among Syrians as long as the extremists – who are recruited from more than 100 countries, trained, funded, then set loose by Western intelligence agencies to spread terrorism – are being eliminated. 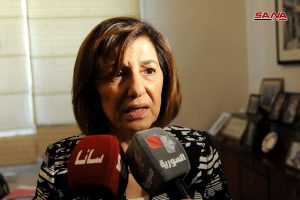 For her part, Shaabam asserted that the terrorism targeting Syria today is the same terrorism that targets humanity everywhere, and all the governments must stand against it.

She said that after eight years of the war on Syria, the world now has respect and love for this country and its leadership and people due to the way they defended it and their convictions and unity.

Shaaban said she is glad to meet Senator Black who is a defender of the Syrian position and Syria’s right to defend itself.

She also welcomed all the free voices in the world who call for the independence of peoples, noting that there are many noble individuals who do not accept what Syria is being subjected to, and their voices need to be made heard by honest and free media.