Moscow, SANA- Deputy Prime Minister, Foreign and Expatriates Minister Walid al-Moallem discussed with Russian Deputy Prime Minister Yury Borisov means to bolster cooperation relations between Syria and Russia at various fields and upgrade them to the level of high political ones ,aimed at achieving a strategic partnership between the two countries. 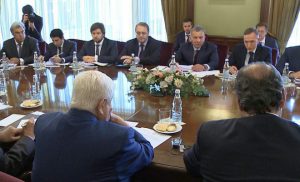 Al- Moallem, who chairs the Syrian side at the Syrian-Russian Joint Governmental Committee for Economic, Commercial, Scientific and Technical Cooperation ,expressed Syria’s appreciation for Russia’s continuous support in the fight against terrorism.

He welcomed Russia’s contribution in reconstructing what has been destroyed by terrorism in Syria , which is an important opportunity for the Russian companies to invest in various sectors in the country.

For his part, Borisov, who chairs the Russian side in the committee, expressed the interest of the Russian government and companies to contribute in re-launching the production process  and achieving the economic recovery in Syria after the military victory overterrorism.