Madrid, SANA- A number of Spanish activists expressed their full solidarity with Syrian leadership, army and people in their war against terrorism which is supported by regional and International regimes.

Meeting charge d’affaires of the Syrian Embassy in Madrid Milad Attieh on Thursday, the activists presented a book entitled “Siria la guerra interminable”’ (Syria, the endless war) as a gift to the Syrian people, army and leadership

The book talks about the global conspiracy on Syria, briefs the Spanish reader on fact of the fierce war launched on it under the so called “Arab spring” and clarifies that it is a dangerous project that threatens the safety and stability of the whole region and not only Syria, as its repercussions will backfire on the supported countries in Europe such as France and Britain.

The activists called for exerting pressure on Spanish government to change its stances towards Syria and lift the unilateral conceive sanctions imposed on the Syrian people. 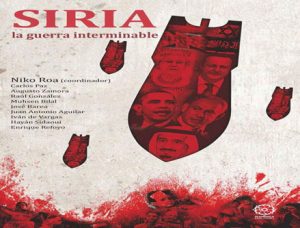 Director of El Espía Digital” newspaper Juan Antonio Aguilar said that the Spanish people do not know what is happening in Syria due to the Spanish misleading media which distorts facts and fabricates lies.

Aguilar indicated that the book present a detailed explanation by many researchers and journalists on the global war on Syria and the reality of the hired terrorist organizations supported by tyranny forces including the US, France, Britain and their agents in the region.