Astana, SANA – Head of the Syrian Arab Republic’s delegation to Astana Dr. Bashar al-Jaafari expressed relief over the results of the ninth round of Astana meetings on Syria.

“We thank the delegations of Russia and Iran and the hosting state of Kazakhstan for their contribution to make this round a success,” Al-Jaafari said Tuesday. 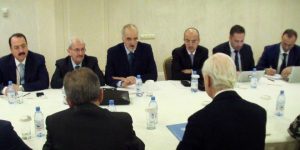 stressed that Syria will go ahead in combating terrorism and liberating all of its territories of either terrorism or any aggressors, adding that the Syrian Arab Army’s achievement of liberating the Eastern Ghouta from terrorism has made Damascus and its surroundings secure.

Al-Jaafari said that the joint statement of the guarantor states of Astana process affirms the adherence to the territorial sovereignty, integrity and safety of the Syrian Arab Republic against any foreign side that would violate that. He continued to say that Syria has put an end to dreams and illusions of the colonialist forces that were seeking to divide the country. 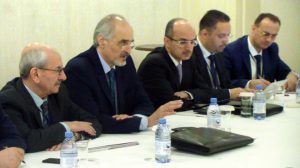 In a different context, al-Jaafari said that today marks the 70th anniversary of the Nakba Day, when the old-neo colonialist forces conspired against the Palestinian people.

Al-Jaafari noted that the whole world witnessed yesterday the revolution of the Palestinian people against the decision of the US President Donald Trump of moving his country’s embassy to the occupied Jerusalem and the brutal atrocities of the Israeli occupation’s authorities against the Palestinians, where thousands were either killed or injured.

“We regret that the international public opinion, heroes of human rights and democracy callers were completely silent about the massacre committed against the Palestinian people,” al-Jaafari continued to say.

For his part, head of the Russian delegation to Astana Alexander Lavrentiev said that some 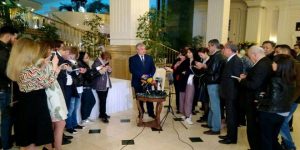 countries deliberately use the excuse of eliminating Daesh (ISIS) as an excuse to stabilize their military presence in Syria, which is totally unacceptable and contrary to international laws.

He added that the upcoming meeting of the presidents of the Guarantor States may be held on August or September.

Earlier, delegation of the Syrian Arab Republic held a bilateral meeting with Iranian delegation, head by Senior Assistant to Iran’s Foreign Minister for Special Political Affairs Hossein Jaberi Ansari in Astana on Tuesday in frame work of the ninth round of Astana talks on Syria.

The agenda of the current round of talks was discussed during the meetings, in addition to issues of common interest by the three parties.

The Kazakh capital of Astana has hosted eight meetings on Syria, the last of which was on Dec. 21-22.

All the meetings emphasized commitment to Syria’s territorial integrity and finding a political solution to the crisis in Syria.

Need to adopt urgent and active international steps to help the Syrians achieve a political solution was also emphasized during the meetings.