Damascus, SANA – Attended by Mrs. Asma al-Assad, the 1st edition of Takween Program competition for supporting entrepreneurship wrapped up its activities on Tuesday at Dar al-Assad for Culture and Arts in Damascus.

The competition is organized by Al Baraka Bank in Syria in partnership with the Syrian Computer Society, Sanad Team for Development, and Fincher Company for Consultations and Training. 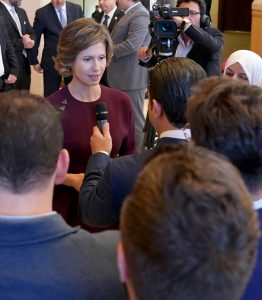 In a statement to journalists on the sideline of the event, Mrs. Asma al-Assad said that the war imposed new challenges on Syria, and small and medium enterprises were among the sectors that were affected, but defending the homeland is done both by fighting terrorism and pursuing development in the face of destruction.

She stressed that the goal shouldn’t be to return to the way we were, but rather to keep up with the world that advanced considerably during the past eight years. 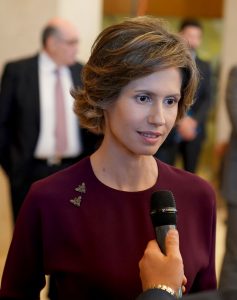 She noted that before the war, there was a common belief that economy relies on big projects, which made support and attention focus on such projects, but then the war came and Syria was targeted economically through sanctions and destroying facilities and factories, which resulted in small and medium projects to shoulder a large portion of the economic burden.

Mrs. al-Assad said that these projects come from the core of communities and their needs and ambitions, and they are capable of sustainability and developing the areas from which they emerge. 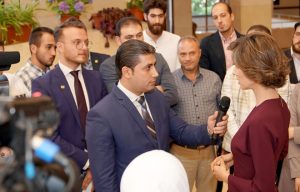 Mrs. al-Assad said that Syria’s enemies tried to make people lose hope, but they failed to achieve this, adding that Syria’s youths are the engine that keeps society going, and when they are weakened, the whole country is weakened, and vice versa.

She said that what happened is that Syria’s youths did not become weakened; rather they embraced hope, fighting for the sake of the rest of the country and pursuing knowledge and education.

Executive Director of Al Baraka Bank, Mohammed Abdullah Halabi underlined the importance of Takween Program as part of the bank’s strategy to help society achieve sustainable development through providing support to creative Syrian youth in order to turn their ideas into action. 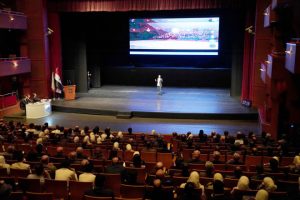 He extended gratitude to Syria’s First Lady Mrs. Al-Assad for her attendance and continued support to the youth and startup financing since 2003, noting that preparations are underway to establish a private business accelerator, which is the first of its kind in Syria, in order to provide an appropriate environment to encourage creative ideas and turn them into real projects that serve the development of the country.

Takween Program aims at supporting youths’ efforts to begin successful startups that would contribute to the growth of national economy.