Damascus, SANA – The People’s Assembly discussed during a session on Tuesday chaired by Speaker Hammoudeh Sabbagh the performance and plan of the Higher Education Ministry and issues related to its work.

Assembly members called for supervising the curricula of private universities, simplifying procedures for registering in open education, giving more attention to university hospitals, and explaining the rumors about the drop in the international ranking of Syrian universities. 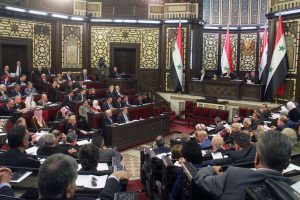 and applying the preparatory year principle to as many colleges as possible are at the forefront of the Ministry’s plan and strategic vision.

Naddaf asserted that work is underway to connect scientific research plans to development and society’s needs, noting that the Ministry is working to establishing a central knowledge database.

Regarding the ranking of Syrian universities, the Minister pointed out that there are no official rankings for universities by the UN or the UNESCO; rankings are currently done via websites such as the Webometrics website which ranks the 22,000 most important universities in the world, adding that there was an improvement in Damascus University’s ranking in 2018; as it was ranked 5,398th in 2017 and now it’s ranked 5,070th.