New aid grant to the Syrian people from China Damascus, SANA-A new grant of food and technical assistance was provided on Tuesday by the Chinese government to the Syrian people.

Mikdad expressed Syria’s appreciation of China’s support, adding that the Chinese government has been providing assistance to the Syrian people to alleviate their suffering both directly and through UN organizations.

He pointed to the positions taken by 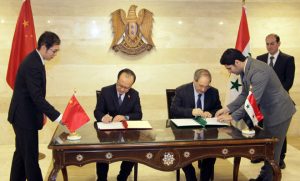 China in international organizations to support the Syrian people in a manner consistent with international law and the UN Charter.

Syria is committed to the political solution of the crisis and is also committed to combating terrorism, taking into account the interests of its people and the support it receives from friendly countries, Mikdad said.

For his part, the Chinese Ambassador said that the Chinese government will continue providing humanitarian and economic assistance to the Syrian people to alleviate their suffering due to the crisis, adding that China’s policy is clear and consistent and that it will stand with the Syrian people till stability is restored to Syria, hoping to achieve the final victory over terrorism as soon as possible.