Damascus, SANA – Deputy Prime Minister, Foreign and Expatriates Minister Walid al-Moallem discussed on Tuesday with UN Under-Secretary-General for Humanitarian Affairs and Head of the Office for the Coordination of Humanitarian Affairs (OCHA) Mark Lowcock means of strengthening cooperation relations between the Syrian government and OCHA to meet the humanitarian needs of Syrian citizens in light of the situation in Syria. 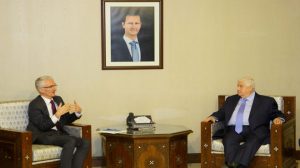 Al-Moallem briefed Lowcock on the efforts of the Syrian government for improving the humanitarian and living conditions of all citizens, meeting their needs, and reducing their suffering in all Syrian areas to alleviate the results of the crisis in Syria caused by the crimes committed by the armed terrorist groups, as well as the sanctions imposed on the Syrian people.

The Minister voiced Syria’s readiness to discuss with the OCHA cooperation within a positive and mutually-supportive atmosphere based on partnership, respect, and the UN rules of humanitarian action, particularly with regard to the full respect of the sovereignty and independence of States.

This visit will be an important opportunity to take a closer look at the situation in Syria with the aim of assessing the humanitarian needs in all areas and increasing the sources of this aid, he said, adding that it will also allow for listening to the Syrian government’s point of view and engaging in constructive dialogue and professional relations with it.

Lowcock said that during his mandate, he will work according to the principles of humanitarian action, especially neutrality, objectivity, independence, and professionalism, in cooperation with the Syrian government. 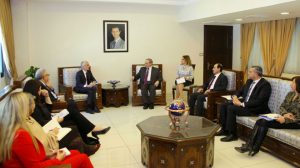 Mikdad reiterated that Syria is ready to cooperate with the United Nation organizations operating in the humanitarian field, adding that this work is conducted in parallel with ending the terrorism in every part of the country and starting a sustainable development and reconstruction process that would revitalize Syria and alleviate the Suffering of the Syrians who have suffered for years due to the terrorist war.

Mikdad said that Syria stressed the need for avoiding the politicization of humanitarian aid.