Damascus, SANA – Deputy Prime Minister, Foreign and Expatriates Minister Walid al-Moallem discussed on Monday with the President of the International Federation of Red Cross and Red Crescent Societies (IFRC) Francesco Rocca and the accompanying delegation the importance of enhancing bilateral cooperation relations in light of the crisis facing Syria.

The Minister expressed Syria’s appreciation for the efforts of the SARC, affirming the Syrian government’s readiness to strengthen cooperation with the IFRC, especially after the victories achieved by the Syrian Arab Army in cooperation with allies which resulted in ridding a number of areas from terrorist groups, stressing the importance of cooperation to meet the humanitarian needs of those areas’ residents. 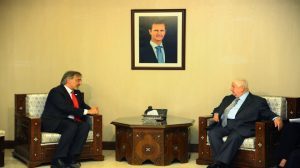 In turn, Rocca thanked the Syrian government for its cooperation with the IFRC and for its great efforts in delivering humanitarian aid and meeting the needs of Syrian citizens affected by terrorism.

Rocca pointed out to the efforts exerted by the SARC in the humanitarian field, asserting the IFRC’s full commitment to supporting it due to the great role it plays during the crisis.

Earlier, Deputy Foreign and Expatriates Minister Fayssal Mikdad met Rocca and discussed with him the humanitarian situation in Syria and means to deal with its effects on innocent Syrian citizens.

For his part, Rocca expressed his great appreciation for the facilitations offered by Syria to aid the work of his organization on Syrian soil.